Mockingbirds at Jerusalem Available at Amazon

Mockingbirds at Jerusalem: A Poetic Memoir (2014)
By Rudolph Lewis 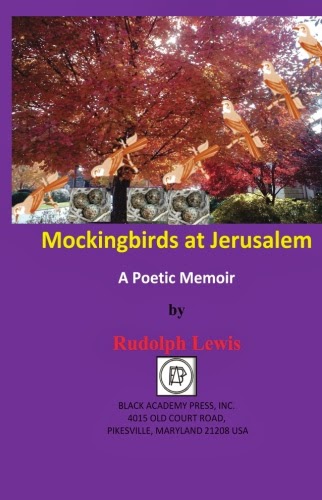 "My Father Still Comes to Me" is the first poem in
the newly published Mockingbirds at Jerusalem: A Poetic Memoir (2014)

My Father Still Comes to Me


When he died, I was not in the room, that bed where I slept
as a boy cold nights by a wood heater. Tinka built that room,
that house from ground, three cinderblocks high, eight rooms
for his family. That country was of mules, outhouse, well dug
with pick & shovel. Mama pulled buckets mud & clay heavy,
for water to drink, wash away fields & harvest. As he passed
to dreamland he took all that world. This house he left behind.
A sun goes down. I’ve come back to Tinka’s home to conjure
that world, a backbreaker crosscut saw & ax splitting fire logs

& walking to school dirty miles &yellow bus faces screaming.
We waited by a highway, far too few words spoken. Trailways
Bus took me away to the city. I was sixteen. I began to be man
beyond the bounds of fields, barnyards, pigs & chickens. Books
& picket signs, college & blackness borne brave new worlds.
In flight I circle above. I’m not too unlike the father who raised me
silent & gloomy as he was in my years he wanted me to be him.
Mama his wife Ella & Ann his daughter nursed him through his
long illness after doctors cut his enlarged testicles—a disease no

one could pronounce. I visited home. He was in bed hiccupping,
prostrate, weak but for his earthmoving prayer to unseen powers.
Did he hear Him, that Negro God of so long ago who I learned to
fear in his voice, a heart he yearned silent? In dreams he comes to
me I forget he went away before I could know him. We strangers
learning in that house he kept building from the ground. Dreams
mirror that rough space. I was never homeless. Walls spin round.
He pulled me into his arms. We dancing whirling like dervishes.
Afraid of falling, I woke from my childhood when he went away.


"Ode to Walls" is the last poem in the newly published
Mockingbirds at Jerusalem: A Poetic Memoir (2014)


1. You rose from the stony earth with bloodstained groans
to bestow birth and growth to civilization.
You were created first to support roofs
and ceilings against the sun and storm—
mud huts and the wooden longhouse
to divide space for privacy
a barrier to moving earth, stone and water.
You’ve outgrown your modest grace for mural beauty
& amp; art. You’re upright now for prisons and trophies.
O, Ancient One, monstrous stone Serpent
that will not fall. You snake your way speaking
volumes from the Great Wall of China to ’s
West Bank barrier to northern Mexican boundaries
to secure residences here in . Your strength
mortared dead men’s bones to ideology.

2. You metamorphosed Deceiver, descendent of Satan,
tossed from Heaven, so long ago. You Separator of
togetherness! we breathe your essence deeply daily
as the skull’s wolf bane, in the heart's pump. Our soul’s
categories embrace nothingness not flowing, not permeable
to warmth and care, no connecting doors to enter rooms
of ethical ruminations. As mechanical as industrial
centuries we return to a hotel hallway change our masks,
our business suits before entering another orange toga
fantasy of ourselves. Our precarious lives demand
we call such deceit—poise, freedom from terror.

from Mockingbirds at Jerusalem: A Poetic Memoir

Mockingbirds at Jerusalem: A Poetic Memoir


This is an achievement, a long black surreal song about 1) return and exile, 2) family history and confrontation with legacies basically devoid of romanticizing, 3) nature uncooked, 4) dreamwork much akin to what Australian Aborigines brought out of some African time warp to the island continent, 5) an echo of Bob Kaufman’s imagination that pays tribute to his undersung goodness, and 6) a poet’s psychology.

The subtitle for the collection is crucial, because it reminds us that while the individual poems can stand alone, they present a richer and deeper texture in combination with one another.  Just as my friend Sterling D. Plumpp found his voice in probing and reprobing of a blues ethos, you have discovered your own in Nature, time, and human nature that identify your origins.—Dr. Jerry Ward


Your imagery is rich and your emotion feels authentic.  Your poems read like a canvas—painterly. For some (southerners like me), the book should and probably will create a strong sense of nostalgia.   For younger persons, it may help to educate. I pray that God will find you the right publisher because your manuscript deserves to circulate in hard copy (as well as in digital format.)   It should be on a new books library shelf in places you have never heard of so others may know and learn.—Jeannette Drake

Posted by Unknown at 6:26 PM No comments: