Sadism and the Southern White Man 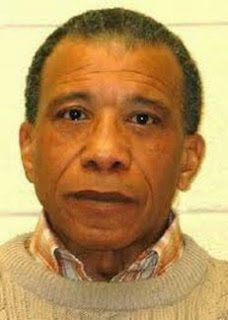 “There is in Southern white man, distributed almost as thickly as the dialect,” James Agee wrote in 1936, “an epidemic capability of sadism which you would have to go as far to match and whose chief basis is possibly, but only possibly, and only one among many, a fear of the Negro, deeper and more terrible than any brief accounting can suggest or explain.  The flaw of sadism can turn its victims loose into extremities which the gaudiest reports have only begun to suggest” (223-224). 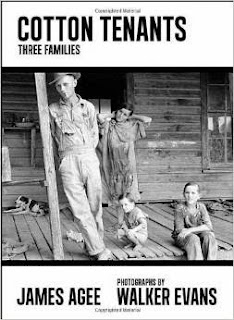 
These surgical words come from the conclusion of “Cotton Tenants: Three Families,” a report Fortune magazine would not publish. Cotton Tenants did not see print until 2013. Agee indicted his race in a way his race dared not acknowledge, for to have done so would have been tantamount to staring into Medusa’s eyes.  Agee’s people understood that “Southern white man” was identical with “American man” and that “fear of the Negro” was a sly allusion to a Yankee idea represented through a Spanish character in Herman Melville’s “Benito Cereno.”


Agee knew his race well.  So too did F. Scott Fitzgerald, Lillian Smith, Erskine Caldwell, Tennessee Williams, Eudora Welty, William Faulkner, and Flannery O’Connor, tattling about the foibles and flaws of the race.  Faulkner and O’Connor outdid their contemporaries in creating secular and religious mythopoeia, moving Agee’s hurtful truth into a zone of protective aesthetics.  If Agee’s classic Now Let Us Praise Famous Men (1941) stands as nonfiction protest against Southern wretchedness and American economic injustice, Cotton Tenants helps us to identify its rightful heirs in the lines of protest fiction.


One of them is The Sacrifice (: HarperCollins, 2015) by Joyce Carol Oates. In her 41st novel, Oates deserves respect for protesting “the flaw of sadism” in her race. She is to be applauded for writing a great American protest novel. As chilling as the 1958 film “Touch of Evil,” directed by Orson Welles, The Sacrifice is set in 1987, the year we witnessed the tragedy of Tawana Brawley.  Or maybe the profound tragedy of Brawley was watching us.  In post-whatever time and space, it is difficult to say who is gazing at whom.  In this sure uncertainty, it is amusing to think that Oates may have reread Friedrich Nietzsche’s proposition #183 from The Will to Power before writing The Sacrifice:


“The symbolism of Christianity is based upon that of Judaism, which had already transfigured all reality (history, Nature) into a holy and artificial unreality—which refused to recognize real history, and which showed no more interest in a natural course of things.”


Oates seems to have intimate knowledge both of the banality of evil and of its consummate absurdity, of its power to rip apart the delicate ironies and nuances which give her most recent novel its significance. In the “Afterword,” Oates emancipates the cat from the bag, asserting that “The Special New York State Grand Jury Report” in the Tawana Brawley Case (October 7, 1988) was of special interest to her.  And with emancipation comes a fine turn of the screw. 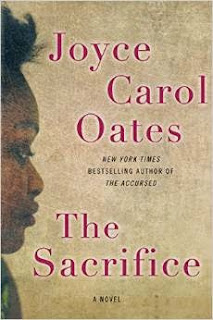 The Sacrifice by Joyce Carol Oates


http://www.amazon.com/Sacrifice-Novel-Joyce-Carol-Oates/dp/006233297X/ref=nosim/?tag=chickenajourn-20
The record of progress in the American Dream from reports on the lynching of Emmett Till to the latest story on which racial bullet murdered which unarmed, non-white American male is the foundation for The Sacrifice.  Oates’s characters are truly the extremities spawned by the flaw of sadism.  A shock of recognition comes from considering, after giving passionate attention to the novel, that all Americans are infected by one version or another of the flaw.  Joyce Carol Oates has succeeded in writing a remarkable instance of the American protest novel.  I recommend The Sacrifice to readers who are brave enough to make peace with the agony and the honesty. 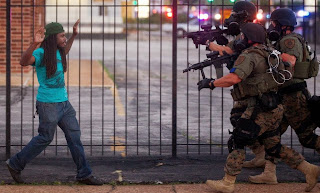 11 alarming findings in the report on police

The Department of Justice released a scathing, 102-page report in full on Wednesday, condemning the Ferguson Police Department of routinely violating the constitutional rights of African-Americans living in the suburb. The months-long investigation unearthed instances of when money and racial bias factored into the police department’s unlawful activities – here’s a small window into what investigators found:

1.  Issuing citations was a competition for some officers

“Issuing three or four charges in one stop is not uncommon in . Officers sometimes write six, eight, or, in at least one instance, fourteen citations for a single encounter. Indeed, officers told us that some compete to see who can issue the largest number of citations during a single stop.”

In March 2010, the City Finance Director wrote to Chief Jackson: “unless ticket writing ramps up significantly before the end of the year, it will be hard to significantly raise collections next year … Given that we are looking at a substantial sales tax shortfall, it’s not an insignificant issue.” In March 2013, the Finance Director wrote to the City Manager: “Court fees are anticipated to rise about 7.5%. I did ask the Chief if he thought the PD could deliver 10% increase. He indicated they could try.”

3. Officers would occasionally arrest and/or stop African-Americans with no reason

“From a July 2013 incident in which a police officer came across an African-American man on the way to arrest someone else in an apartment building and ended up cuffing the first man “without reasonable suspicion”: “Ignoring the central fact that they had handcuffed a man and put him in a police car despite having no reason to believe he had done anything wrong, a sergeant vigorously defended FPD’s actions, characterizing the detention as “minimal” and pointing out that the car was air conditioned.”

“In another example from the report: An African-American man recounted to us an experience he had while sitting at a bus stop near . According to the man, an FPD patrol car abruptly pulled up in front of him. The officer inside, a patrol lieutenant, rolled down his window and addressed the man”:

Lieutenant: Get over here.

Bus Patron: Why? What did I do?

Lieutenant: Give me your ID.

Lieutenant: Stop being a smart ass and give me your ID. 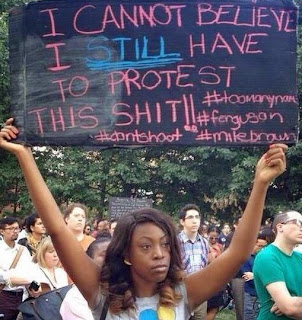 4. Ferguson officers aren’t writing up their reports, and no one is checking

“FPD supervisors are more concerned with the number of citations and arrests officers produce than whether those citations and arrests are lawful or promote public safety. Internal communications among command staff reveal that FPD for years has failed to ensure even that officers write their reports and first-line supervisors approve them … In 2014, the official had the same complaint, remarking on 600 reports that had not been approved over a six-month period. Another supervisor remarked that coding errors in the new records management system is set up “to hide, do away with, or just forget reports.”

5. Literally everyone is “WANTED”

“Instead of swearing out a warrant and seeking judicial authorization from a neutral and detached magistrate, officers make the probable cause determination themselves and circumvent the courts. Officers use wanteds for serious state-level crimes and minor code violations alike, including traffic offenses. FPD command staff express support for the wanted system, extolling the benefits of being able to immediately designate a person for detention. But this expedience carries constitutional risks.”

6. officers are confused about the First Amendment

“FPD arrests people for a variety of protected conduct: people are punished for talking back to officers, recording public police activities, and lawfully protesting perceived injustices.”

7. officers are using unnecessary force against the mentally ill

“FPD records suggest a tendency to use unnecessary force against vulnerable groups such as people with mental health conditions or cognitive disabilities, and juvenile students … Ferguson is currently in litigation against the estate of a man with mental illness who died in September 2011 after he had an ECW deployed against him three times for allegedly running toward an officer while swinging his fist.”

“A November 2008 email stated that President Barack Obama would not be President for very long because “what black man holds a steady job for four years.”

“An April 2011 email depicted President Barack Obama as a chimpanzee.”

“An October 2011 email included a photo of a bare-chested group of dancing women, apparently in , with the caption, “Michelle Obama’s High School Reunion.”

9. If you’re a mayor or employee of the court, no tickets for you!

“Court records and emails show City officials, including the Municipal Judge, the Court Clerk, and FPD supervisors assisting friends, colleagues, acquaintances, and themselves in eliminating citations, fines, and fees.”

“In November 2011, a court clerk received a request from a friend to “fix a parking ticket” received by the friend’s coworker’s wife. After the ticket was faxed to the clerk, she replied: “It’s gone baby!”

“In March 2014, a friend of the Court Clerk’s relative emailed the Court Clerk with a scanned copy of a ticket asking if there was anything she could do to help. She responded: “Your ticket of $200 has magically disappeared!”

10. Police shoved a 15-year-old African-American girl into a locker

“In November 2013, a [School Resource Officer] charged a ninth grade girl with several violations after she refused to follow his orders to walk to the principal’s office. The student and a classmate, both 15-year-old African-American girls, had gotten into a fight during class. When the officer responded, school staff had the two girls separated in a hallway. One refused the officer’s order to walk to the principal’s office, instead trying to push past staff toward the other girl. The officer pushed her backward toward a row of lockers and then announced that she was under arrest for Failure to Comply.” 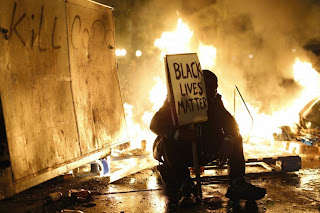 “They also release canines on unarmed subjects unreasonably and before attempting to use force less likely to cause injury.”

“In December 2011, officers deployed a canine to bite an unarmed 14-year-old African-American boy who was waiting in an abandoned house for his friends … … The officer peeked into the space and saw the boy, who was 5’5” and 140 pounds, curled up in a ball, hiding. According to the officer, the boy would not show his hands despite being warned that the officer would use the dog. The officer then deployed the dog, which bit the boy’s arm, causing puncture wounds.”

“By the canine officer’s own account, he saw the boy in the closet and thus had the opportunity to assess the threat posed by this 5’5” 14 year old. Moreover, there were no exigent circumstances requiring apprehension by dog bite. Four officers were present and had control of the scene.”

“According to the boy, with whom we spoke, he never hid in a storage space and he never heard any police warnings. He told us that he was waiting for his friends in the basement of the house, a vacant building where they would go when they skipped school. The boy approached the stairs when he heard footsteps on the upper level, thinking his friends had arrived. When he saw the dog at the top of the steps, he turned to run, but the dog quickly bit him on the ankle and then the thigh, causing him to fall to the floor. The dog was about to bite his face or neck but instead got his left arm, which the boy had raised to protect himself. FPD officers struck him while he was on the ground, one of them putting a boot on the side of his head. He recalled the officers laughing about the incident afterward.” 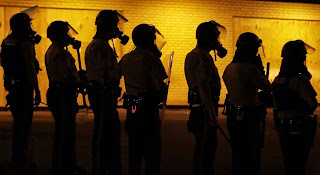 PLUS: Critical statistics uncovered in the report 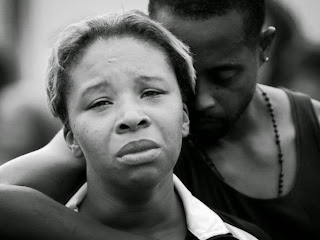 “This data shows that police and court practices impose a disparate impact on black individuals that itself violates the law. Title VI and the Safe Streets Act prohibit law enforcement agencies that receive federal financial assistance, such as FPD, from engaging in law enforcement activities that have an unnecessary disparate impact based on race, color, or national origin.”

Posted by Unknown at 9:23 AM No comments: